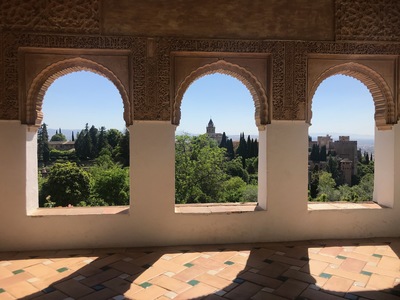 Taken inside Granada, Spain's Islamic palace-- La Alhambra-- this photo portrays the intricate detail that is used in early modern Spain's Moorish architecture. The shown horseshoe arches are a very common theme in this region of the country. The arches frame another part of the palace, while also capturing Granada's beautiful landscape. This photo makes one feel La Alhambra's timelessness within its gigantic thought-out walls. This placement within the palace gives a feeling of living in 17th century Spain, and leaves one with many curiosities of the religious struggles and ways of life that were existing in during that specific time.